South Korea’s Jeollanam-do: A Journey Through Its Best-Kept Secrets

Discover this magical province situated between Seoul and Jeju Island.

Even though many people regard Korea as a travel destination top on their list, they might have limited themselves to popular cities like Seoul, Jeju Island and Busan. If you were interested in knowing more about Korea, you would have to add Jeollanam-do – a magical province situated between Seoul and Jeju Island – to your list.

Word has it that if one had not set foot in Jeollanam-do, it would be a lie to say that they have been to Korea. Located in the southwestern part of Korea, Jeollanam-do, comprises areas such as Sinan County, Mokpo, Haenam County and Gangjin County. The province not only possesses a long and rich cultural heritage, but also a wealth of tourism resources.

Let’s move southwards from Seoul to Jeollanam-do and discover its best-kept secrets! 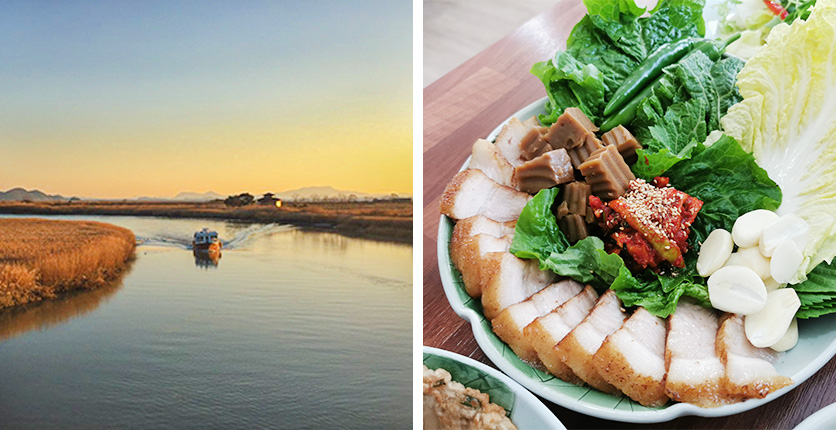 Situated on the west coast of the southwestern Korean peninsula, Jeollanam-do is known as the “Pearl of Korea’s Southwestern Coast” and also reputed to be the “Land of Life”, as vast mountains and fields, beautiful oceans and beaches, lakes and rivers, as well as numerous islands and endless stretches of coastline – all of them still retaining their pristine form – make up its picturesque beauty.

The province is not just a feast for the eyes, but also considered to be a treasure trove of Korean folk customs due to its bountiful cultural delights. To the Koreans, it is also a celebrated “Food Paradise”, thanks to the many kinds of traditional Korean cuisines that have their origins here. 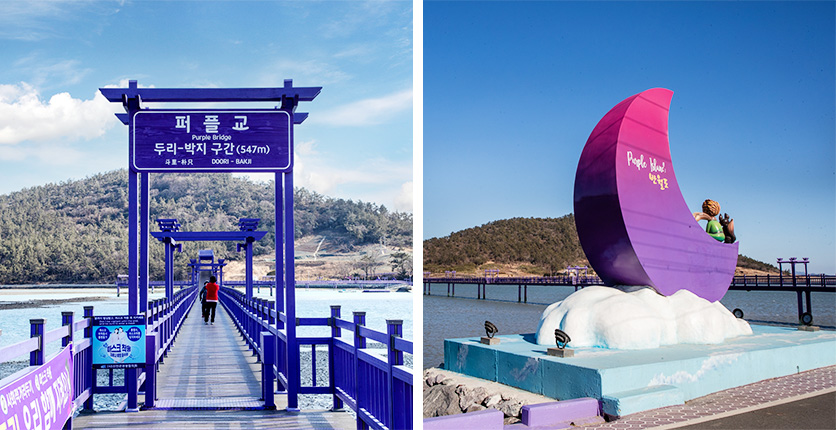 Purple Island: A paradise to see and be seen

There are more than a thousand islands in Sinan County, and among these are the adjacent Banwol and Bakji Island. With over 1,000 years of history, Purple Island – a UNWTO 2021 Best Tourism Village – offers a diversity of nature and culture. Marvel at its natural wonders like the Shinandadohae Biosphere Reserve and National Park, and the Korean Mudflats Provincial Park, designated as UNESCO World Natural Sites.

Purple Island was created with the intent of generating sustainable tourism for the village by merging two islands, Banwol and Bakji Island, a place where everything is painted in purple, a symbol of physical, spiritual and mental healing. In an effort to boost the economy and develop the tourism industry, over 400 houses were painted purple on these two islands. Other than constructing purple telephone booths and a big purple bridge, lavender was also planted to complete the dazzling purple landscape. 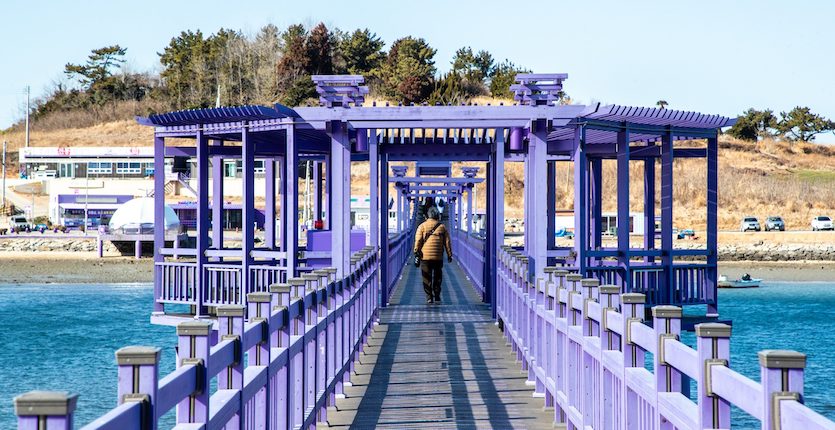 The purple bridge connecting the two islands is 1.4km long. From here, you would see a striking expanse of purple: the roofs, facades, sight-seeing vehicles, signs, public telephone booths, and even the crockery and cutlery used in restaurants are all purple.

How to get there: Take the number 2004 village bus at Mokpo Bus Terminal, get off at the Yidong Intersection and transfer to the Anjwa-Myeon (Anjwa Village) bus, alighting at the Purple Bridge Station. You will reach your destination after walking across the purple bridge. 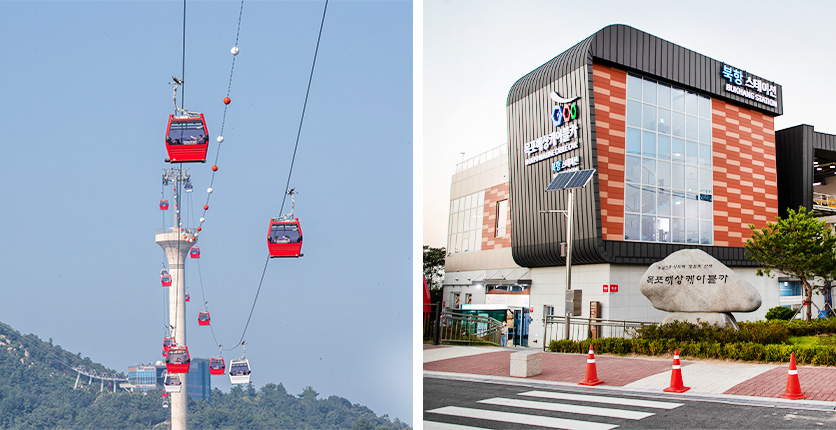 View the sunset from the Marine Cable Car

When visitors arrive in Mokpo, it is a must to go to Yudalsan in the west of the city centre and take a ride on the Mokpo Marine Cable Car. The place is renowned for witnessing the sun setting into the sea in front of Mokpo, as well as the gorgeous scenery of Yudalsan. 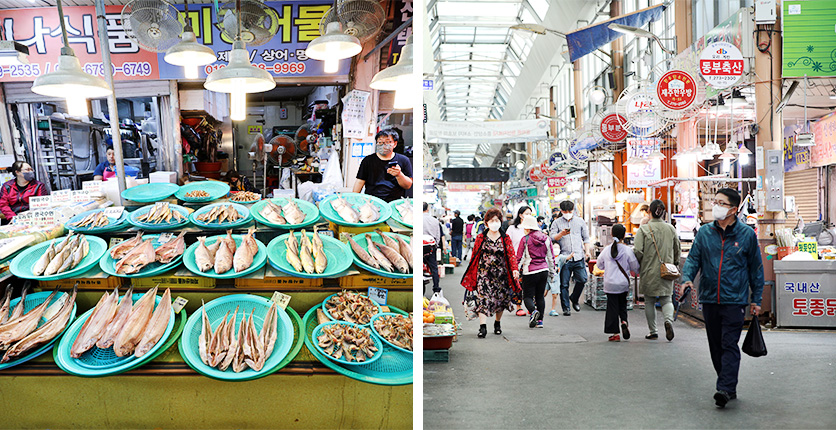 Savour delectables at the traditional market

A visit to the Mokpo Dongbu Market located is highly recommended. There are 375 stores within the premise, making it the largest market in Mokpo. Other than seafood, agricultural products and fashion apparel, the best find in the market would be the numerous kinds of Korean street food. These include the many varieties of Korean fishcake, spicy fried Korean rice cake, tempura, chicken skewers, rice wrapped in nori, hotdogs and sashimi, to name a few, all of which are affordable and authentic in taste. 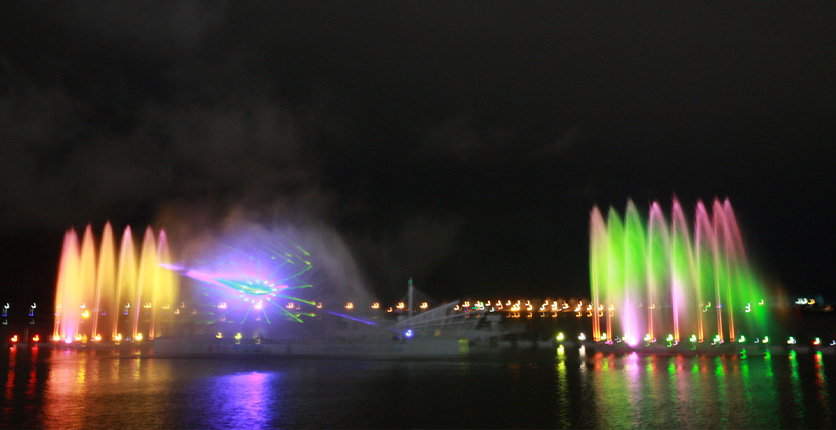 The Mokpo Marine W Show at Peace Square is the world’s foremost floating supersized musical fountain where music interplays with water and light to present a beautiful and magnificent show. Colourful lights twinkle and glitter on the satin black surface of the ocean as water jets perform various “juggling” acts, and the fountain itself morphs and moves in step with the music.

Haenam County, situated in the southern part of Jeollanam-do, lies at the foot of Duryunsan and faces the sea on three sides. The area is famed for its picturesque natural scenery. 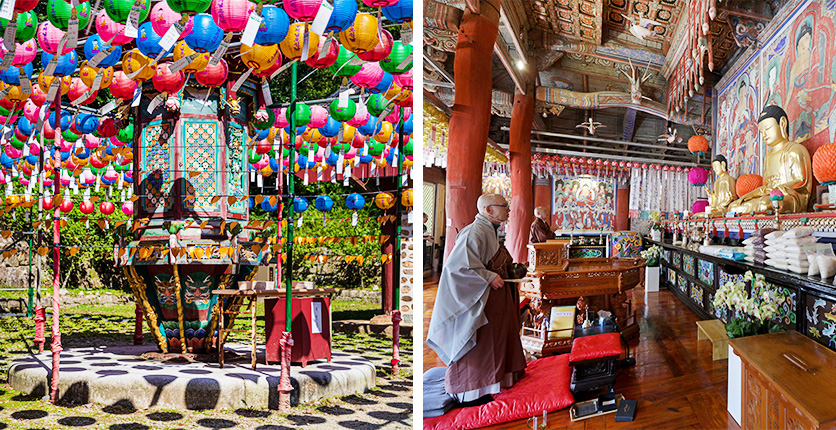 Duryunsan in Haenam Country is the tallest mountain in the southern Korean Peninsula with an elevation of 703m, and is home to many temples. Many believe that Daeheungsa Temple on the slope of the mountain was built before the Goryeo Dynasty (918 to 1392), but there was no exact record of its founding. In 2018, Daeheungsa Temple and six other Buddhist temples (or sansa in Korean) were recognised as UNESCO World Heritage Sites under the name “Sansa-Korea’s Buddhist Temples”, and the seven temples became Korea’s 13th World Heritage Site.

Daeheungsa is also known as Daedunsa. The temple was destroyed and rebuilt several times, its present building having been rebuilt in the 19th century.  Lush maple trees as well as evergreen pine and cypress trees fill the temple grounds, and the two sides of the 2km-long pathway from the mountain base to the temple brim with pretty mountain streams. Huge trees soar into the sky, their crowns forming a shelter for the natural boulevard, making it the perfect pathway for visitors who are interested in hiking up the mountain. 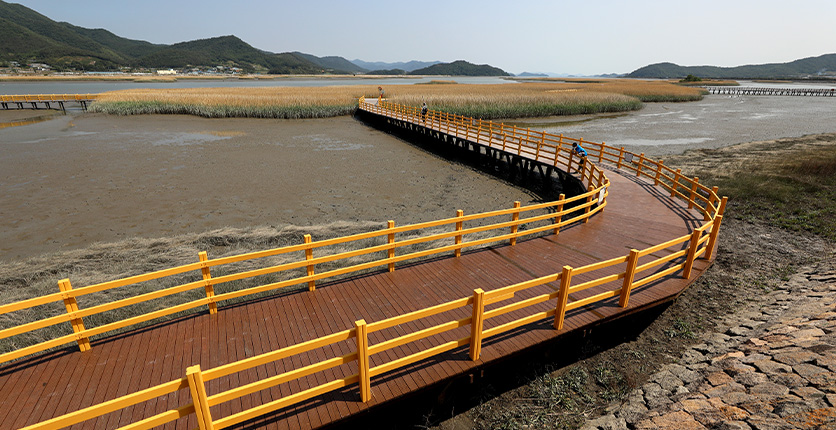 An ecological park of reed wetlands

The most well-known ecological wetlands in Jeollanam-do are the Suncheon Bay Wetlands Reserve. However, in Gangjin, there are also other wetland paradises that are on par with Suncheon, such as the Gangjinbay Eco Park.

Located at the intersection of Tamjin River and Gangjin Bay, Gangjinbay Eco Park is an open estuary without a dam, enabling the formation of a natural expanse of water. The ecological environment here encourages the breeding of up to 1,131 varieties of floral and fauna. In winter, many migratory birds make the wetland their home, flying there once every year.

Dasan Chodang: The former residence of a renowned figure

Situated on Mandeoksan mountain ridge, Dasan Chodang was once the residence of the exiled scholar Jeong Yak-yong during the Joseon period. “Dasan” was the name of the hill in Gangjin situated behind the house that Jeong lived in, and he took up the name “Dasan” as his alias. Mr Dasan began his exile in Ganjin in 1801, moving to Dasan Chodang in 1808 and living there for 10 years. During that time, he was teaching his followers while writing books and literary pieces, producing many notable works. 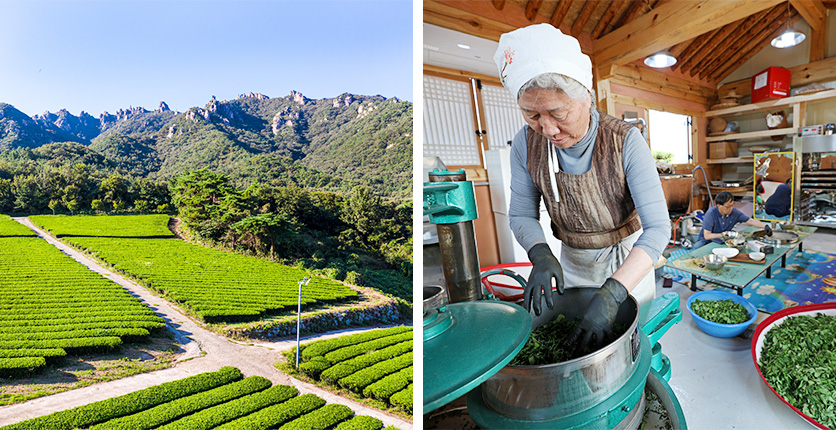 A relaxing tea plantation at the foot of Wolchulsan

Though not as well-known as those in Boseong-gun, the tea plantations in Gangjin County are more leisurely and not as touristy. The Gangjin Tea Plantation is located on the south of Wolchulsan mountain base. Day and night temperatures vary widely in Wolchulsan, also known as “The Little Diamond of Yeongam”. Thick fogs are also common, and all these provide the ideal climatic conditions for tea planting. Visitors can enjoy relaxing moments in the green tea fields, snap pictures, as well as sample various teas at the Tea Culture Training Centre in the tea plantation.

In Part 2 of our story, we’ll take you to more highlights of Jeollanam-do, including a K-drama filming location!

Also stay tuned to find out how you can sign up for a special tour to Jeollanam-do by UWeekly, featuring an exclusive itinerary – more details to be released soon.

Want more travel articles like this, and other lifestyle content right in your inbox? Download the new SAFRA mobile app and opt in for the eNSman Newsletter – you don’t need to be a SAFRA member to subscribe – and never miss another story! 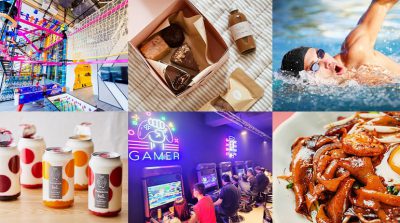 This September, cheer on as babies race, play a round of cartoon-inspired mini-golf, and buy cakes from a vending machine!

Explore Singapore in new ways while enjoying a luxurious stay.