Open up a Singapore time capsule.

It’s that time of the year again when we reflect upon our arduous journey to achieve the independence that defines Singapore today. Visiting these historical showcases of Singapore’s patriotism will let you appreciate how far we have come as a nation. Our National Day Parades and celebrations have evolved through the years, introducing new themes and visual aesthetics so as to remain contemporary. Parades of the past were more modest and simple but that in no way diminishes their significance. 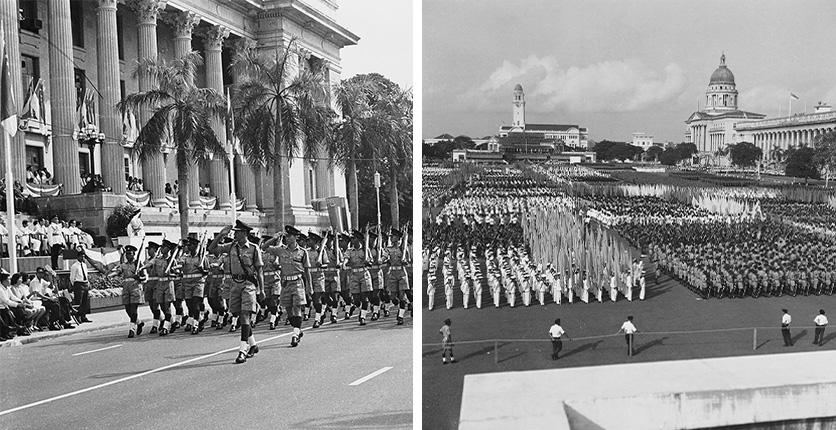 The inception of the National Day Parade (NDP) in 1966 marked our first parade as an independent nation. However, this inaugural parade was met with contentious scepticism.

Fortunately, the parade’s turnout proved the naysayers otherwise. The cheers of excited onlookers reverberated through the streets of Chinatown and Tanjong Pagar as the People’s Defence Force marched through, the six contingents of the voluntary defence force showcasing Singapore’s military prowess and unity. Five hundred thousand students gathered excitedly in their schools to tune in to the National Day message read by their principals before singing the national anthem with fervour.

Fireworks, the perfect end to an animated parade, illuminated the skies with impressive caricatures, with the most impressive one being a sea dragon. While simplistic, this parade set an optimistic precedent for future parades to come, as well as a strong display of national patriotism. 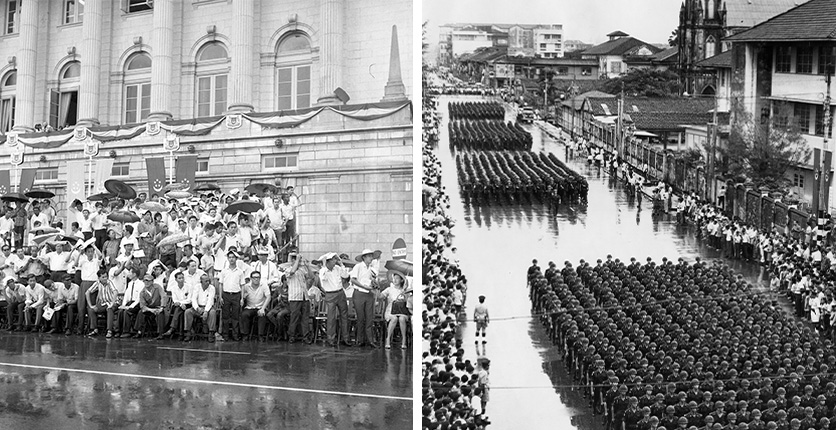 The significance behind this parade lay not in its extravagance but the stormy weather that plagued the commemoration of our journey towards independence.

Singaporeans were streaming into Padang, expecting another glorious display of theatrical showmanship. However, a flurry of harsh gales howled under gloomy skies. Everyone was hoping that it would be temporary. Then, heavy rains pelted the entire Padang. It was an ominous start to the much-anticipated event.

However, the audience stayed put, thousands with and without umbrellas showering the performers with passionate ovation. Contingents of soldiers and civil workers trudged through the mud as the band played their instruments with gusto despite the downpour. In fact, our current Prime Minister Lee Hsien Loong was also part of the troupe that performed.

“We will brave on!” said our founding Prime Minister Mr Lee Kuan Yew as he sat stoically in his seat during the parade. The 1968 parade was a reflection of Singapore’s resilience, where our strength stems from our unity against adversity. 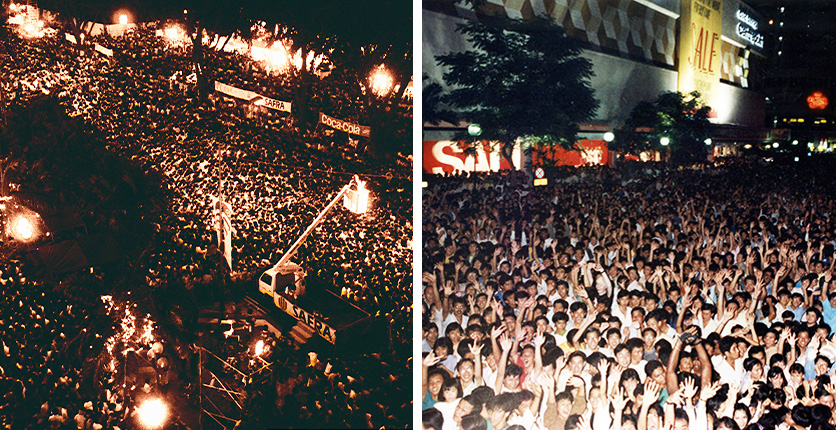 Described to be “the biggest, the best, the loudest”, this is arguably one of Singapore’s most innovative approaches to the National Day festivities. Organised by SAFRA – who took just 17 days to plan the event – sound systems to power 50 discos, 13,000 m of cables and 1.2 km of cloth were brought together for the largest outdoor party ever held in Singapore. About 250,000 people flooded Orchard Road on the night of 27 August, partying the night away. What better way to honour Singapore’s cultural harmony than celebrating with partygoers from myriad backgrounds, sharing a common love for music and festivities. Many who attended that inaugural Swing Singapore still treasure their vivid memories of that day, a reminder of a simpler time.

Sadly, a national celebration of such a scale was discontinued in 1992 and while variants of it were attempted, none can come close to the revelry and hype of 1988’s Swing Singapore. 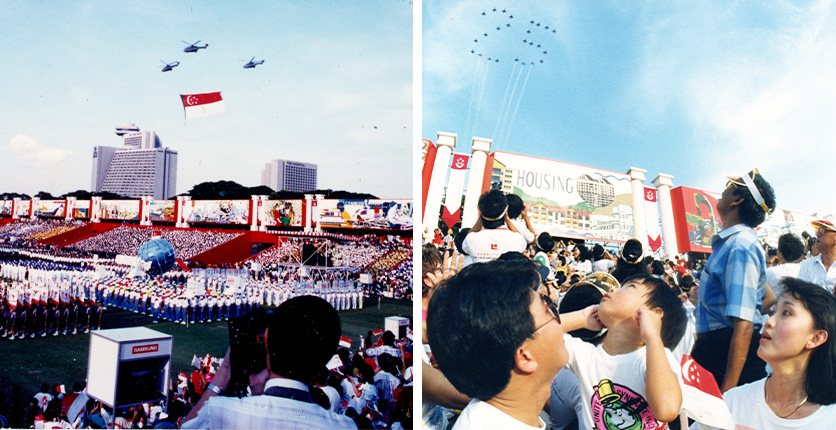 Jubilee Spectacular is truly an apt name for the magical evening Singaporeans spent at the National Stadium. Not only was it the 25th anniversary of Singapore’s independence, 1990’s parade was also the last one that Mr Lee Kuan Yew would attend as Prime Minister, before passing the reins to Mr Goh Chok Tong.

As night started setting in the stadium, the blanket of darkness was illuminated by amber light sticks that audience members waved around, each a little star on its own. A choir comprising representatives from Chinese, Indian and Malay groups congregated to form a melodious rendition of “One People, One Nation, One Singapore”, an anthem of unity and strength that echoed through the stands as audience members sang in unison.

“Singapore is not a Malay nation, not a Chinese nation, not an Indian nation. Everybody will have a place in Singapore”, as said by our late founding Prime Minister. The song and parade of 1990 best embodies and exemplifies this and will definitely be one to remember. 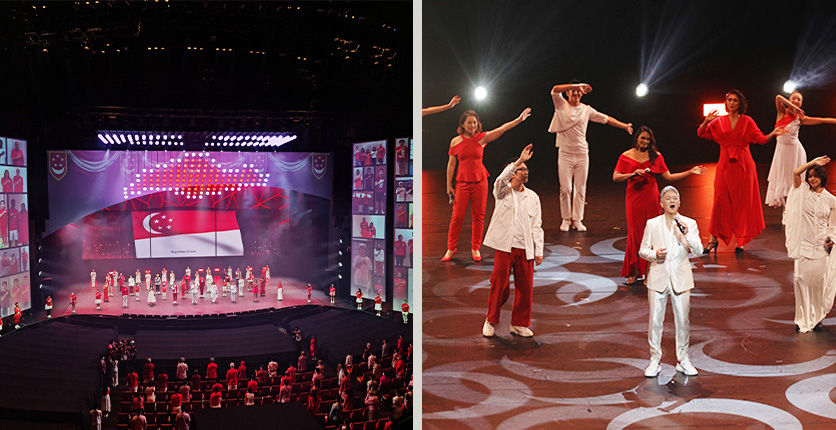 2020 – Together, A Stronger Singapore

The Covid-19 pandemic raged across the globe in 2020, putting a screeching halt to all kinds of events and celebrations – including the traditional National Day Parade. However, the pandemic did not dampen the Singaporean spirit.

The NDP in 2020 focused on allowing Singaporeans to celebrate in their homes. The parade was decentralised, with many parade segments – including the state flag fly-past, the Red Lions free-fall jump, and mobile column – taking place in different locations around the island and streamed live over TV and online. The displays also paid special tribute to frontline workers.

The day’s celebrations culminated in the NDP 2020 Evening show, which was broadcast live from The Star Performing Arts Centre and featured inspirational stories of Singaporeans during the pandemic.

To end the day, Singapore flats lit up in a sea of red as residents waved their phone torches (covered in red filter stickers included the funpack) during the Light-Up Moment, a display of our resolute spirit in uncertain times. There was also a hearty singalong, as thousands joined a virtual choir in a rendition of “We Are Singapore.”

Concluding the virtual celebration was an impressive exhibit of fireworks across Singapore’s heartlands as residents enjoyed them together, despite the physical distancing.

The fun packs of the past were simple “supply kits”, where necessities such as bottled water and snacks were given out to parade participants. 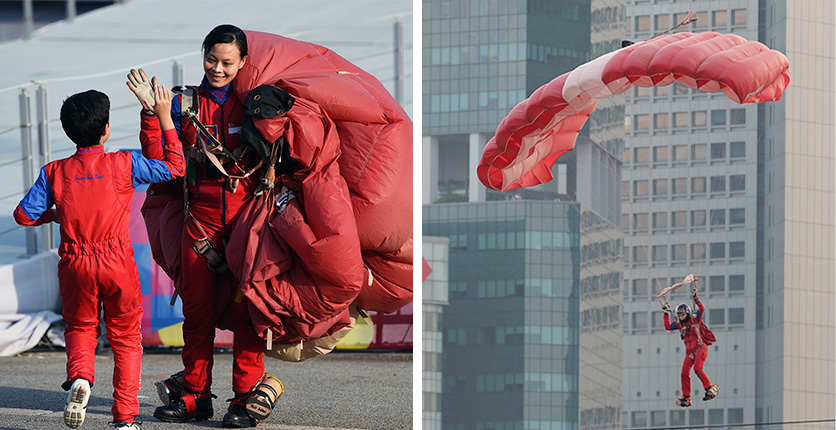 The audience shared a sentimental and heartfelt moment when a touching tribute to Mr Lee Kuan Yew, who had passed away in March that year, was screened during the parade. Most of the audience were visibly emotional during the tribute.

Which is your favourite National Day Parade, ever? Share with us at magnsman@sph.com.sg! 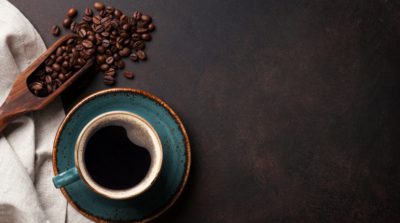 Brew Up A Hot Fresh Cuppa!

Wake up to a different morning by trying out a new flavour of coffee.

Celebrate togetherness without the crowds. Here are 5 pandemic-safe ideas.